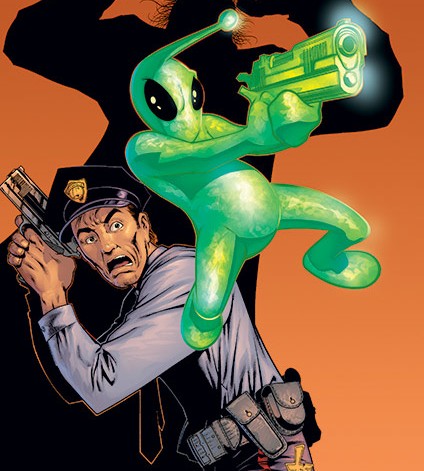 Penny-Farthing Press recently announced the release of its first hardcover anthology-Decoy: Menagerie, Part 1, a 144-page, full color book that features the work of many of the comics industry’s most talented writers and artists.

“The premise of the book is to see how other creators imagine Decoy themes and characters in a series of short stories,” Decoy creator/penciller Courtney Huddleston explained. “The title Menagerie is a play on the anthology concept in that a menagerie is a private collection of wild animals. I see this anthology as my own personal collection of favorite artists and writers.”

The Decoy title, a fan favorite since its debut in 1999, chronicles the humorous, and sometimes dangerous, adventures of a green, shape-shifting alien named Decoy and his earth roommate, Officer Bobby Luck. Through the course of two mini-series and a trilogy of one-shots, readers followed Decoy and Luck through encounters with hardened criminals, interspecies blood feuds, maniacal assassins, and wild animals. Though Decoy occasionally dips into darker material, Huddleston’s comical style offsets these narrative components with a running current of humor.

Huddleston clarifies his approach to his creation: “The fun part of Decoy is that it is fun. There is always the danger of preciousness with a main character that is cute in appearance, and I have tried to avoid the overly cute in Decoy’s portrayal. Instead, I have attempted to make the interactions between Luck and Decoy funny and realistic. Well, as realistic as they can be when a space alien is concerned. The point is, reality is funny. Even when things are at their worst, humor is always present. It’s the humor that helps people cope with hardship. That’s what I’m after in Decoy.” 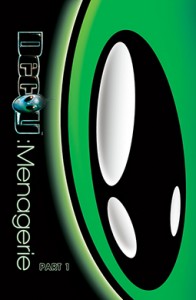 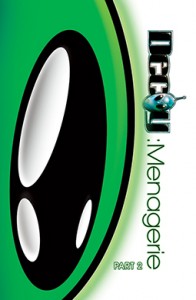 Priced at $19.95, Decoy: Menagerie, Part 1 Anthology will be distributed through Diamond, FM International, Ingram, and Baker and Taylor in November 2005. However, advance copies of the book may be purchased online exclusively at www.pfpress.com with special fan and retailer discounts. Log onto the Penny-Farthing Press website for more information.

Founded in 1998 by Ken White and founding Editor-In-Chief Marlaine Maddux, Penny-Farthing Press employs both veteran and unknown individuals in production of the company’s publication line, a line that has received numerous awards and critical accolades in PFP’s short existence. The prestigious Spectrum Award and the Gutenburg Metal D’Argent for Excellence in Printing are two examples. Furthermore, Penny-Farthing Press publishes a limited number of titles per year in order to ensure quality and a grass roots connection with readers all over the world. This “boutique” approach is unique in the comics industry and allows only the finest products to leave PFP’s doors. The company is headquartered in Houston, Texas.

These conditions are true of the three examples we have just seen, as they are of the following relatively short sentence by hemingway it was a hot day and the sky was bright and the road was white and justbuyessay.com/ dusty