Captain Gravity and the Power of the Vril, Issue 5 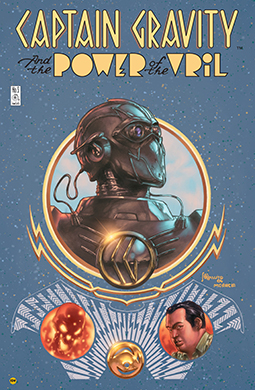 Captain Gravity and the Power of the Vril, Issue 5

Captain Gravity must attempt an impossible trip that could cost him his sanity and his life. Not only does he fly without oxygen in extreme cold, but he also sees visions of his hoped-for future with Chase and the terrifying circumstances of his father’s murder. (May 2005) 32 Pages

“This is such a well written, nicely paced series that the fantastic elements feel right at home; nothing is beyond the realm of possibility. Which was certainly true in the old serials this is an homage to, and this series has, so far, captured that energy perfectly. It’s like Raiders of the Lost Ark, but with a superhero as the male lead.”
– Andrea Speed, www.comixtreme.com