Captain Gravity and the Power of the Vril, Issue 4 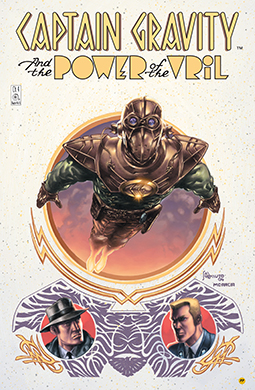 Captain Gravity and the Power of the Vril, Issue 4

A trek to Berlin leaves Captain Gravity’s Vril power spent. Help from a legendary spy, puts the Captain back on track and unwittingly forces him on a collision course with an enemy from the past. In order to save Chase, Captain Gravity must face his worst fear. (Mar. 2005) 32 Pages

“I think what most impressed me about this story was the timid and unsteady personality of the title character. Josh isn’t a typical super-hero here. His fear for Chase’s safety is what drives him forward. He’s scared and doubts his own abilities. He’s not the square-jawed, über-confident type, and that makes him much more human and makes it easier to identify with him despite the unusual setting in time.”
– Don MacPherson, www.thefourthrail.com