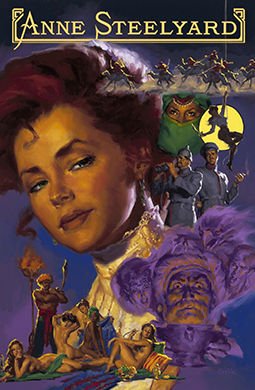 The Gates of Dreams and Starlight

The beautiful and adventurous Anne Steelyard is still searching for the City of Miyah and her ticket to independence from her British, aristocratic family. In the harsh, unforgiving desert, Anne is captured and taken prisoner by a Vizier who does the bidding of an evil wizard who knows Anne’s worst fears. While being held hostage, Anne learns of a secret partnership between the Turks and the Germans that will put her countrymen and its allies in terrible danger as World War I looms in the distance. Anne must now try to escape her captors so she can warn British authorities before it’s too late.

“Anne Steelyard – The Garden of Emptiness is a relentless thriller, that has major shocks throughout the story, that unfold unexpectedly and suddenly, so much so, that you will be gasping for air!”
– Paul Dale Roberts, President, JazmaOnline.com