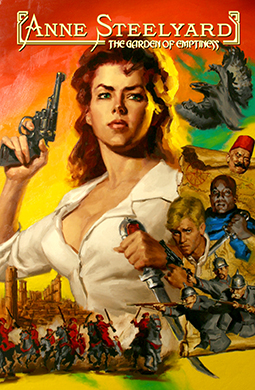 In 1909, the world is an unstable place. Germany and Great Britain posture and glare at one another in a prelude to World War I, and the Young Turks are challenging the last Turkish Sultans for control of the Ottoman Empire. The Relics and treasures being excavated from desert sands are beginning to demystify human history and bring fame and wealth to archaeologists. The traditional world is fighting a losing battle with the modern world, and in no place is this loss felt keener than in the Middle East, a region steeped in the mysticism of ancient human religion.

For one British archaeologist, the chaos of the time is heightened by one simple fact: gender. She is a woman, a woman whose intelligence and ambition force her into direct conflict with the male-dominated spheres of imperialism, scholarship, and politics. Not to be stopped, however, her adventurous and daring spirit leads her into the world of intrigue and enemies. Never one to back down from a fight, she pursues her dream of uncovering one of the greatest archeological finds of all time and claiming her rightful place beside venerated male contemporaries.

“If you like erudite, kick ass heroines that operate in a period that detrimental to women’s rights, pick up Anne Steelyard.”
– Ray Tate, ComicsBulletin.com