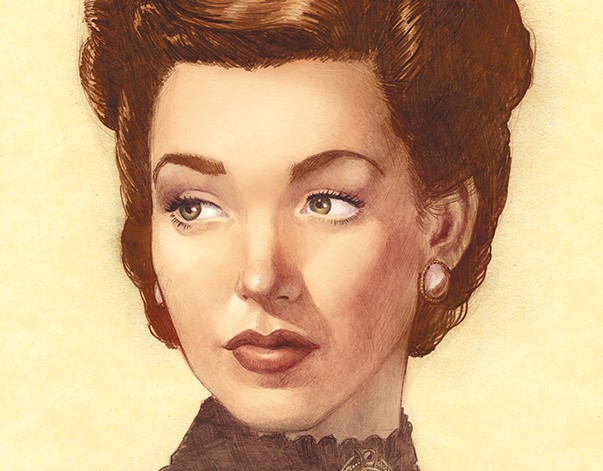 There are so many places to start. I’ll try to swallow the urge to give a history lesson, but that might prove difficult since many important events are rising as the backdrop for Anne Steelyard.

Set in the early 1900s when most of the world is on the cusp of women’s suffrage and World War I is a looming storm on the horizon, Anne Steelyard and the Garden of Emptiness is a classic tale of adventure and mysticism. The title character is the daughter of a wealthy Englishman, and (like all daughters of wealthy Englishmen) she has an unquenchable thirst for adventure, which usually leads to trouble. Anne has seemingly been sent off to Turkey (then part of the Ottoman Empire) by her family to find an eligible husband. However, in reality, she’s more or less running away from home.

Instead of looking for a man to marry, Anne spends her time making friends with the desert tribes and hanging around with her German artist boyfriend, Wolf, who works for der neuedeutschmaschinegesellschaft* (ha, say that nine times fast). When she’s not fleeing the riots that are plaguing Constantinople, Anne is either being used by the Foreign Office due to her self-made contacts and abilities, or she’s trying to head out on one of her archeology digs. Life is pretty exciting for Anne, except it’s not working out the way she would like. The Foreign Office won’t make her a full-time agent, her father is threatening to cut off her money, and she can’t marry Wolf because of her father’s disapproval.

So Anne does what all of us sensible girls do: She sets out to find a lost city that was swallowed up by the desert sand thousands of years ago. There is a much deeper, more Biblical story line running alongside Anne’s, and one can only assume they will cross over at some point. The story is very well written, but it’s the character of Anne that makes the book. She poses the question, “Why can’t I be like the heroine of a blood-and-thunder novel. . . .” If Anne isn’t one, then she’s better than one.

Anne Steelyard and the Garden of Emptiness does emulate classic dime novels or penny dreadfuls with high adventure in distant lands–and there’s a moral message included. This time, however, our hero isn’t a cowboy or a pirate, our hero is a woman–and a smart one at that. Anne is more likely to be compared to Indiana Jones because she’s running around in the desert looking for lost cities, but really, I think she’s just a tad smarter. I would compare her to Evie played by Rachael Weisz in The Mummy–the first film before the producers made her way too kick-ass for her own good–when she was still just a librarian who got in and out of her own trouble (come on, you know you loved Evie). Where Indy uses his whip and gun when he’s in a bind, Anne relies more on her wits and intelligence, but that doesn’t mean she can’t ride a horse and shoot a gun–she can. Anne’s the type of character that appeals to all women. I’m not saying that guys won’t like reading this book, too, but it just might draw more of a female audience. Anne is a woman seeking freedom from the life she is forced to live according to the standards of others. She’s very much a ground-breaking character, or at least she would have been back in the early 1900s. Nowadays, we’re all used to seeing the hardcore heroine fighting to maintain her credibility. Anne is like the predecessor who just so happens to also be the successor.

Anne Steelyard and the Garden of Emptiness is a tremendous effort. I can’t find a single thing that bothered me or that I disliked. It starts strong and ends with a good lead into the second act. I certainly hope there will be one, so don?t leave me hanging here. I truly enjoyed reading this, and I think anyone else who happens to pick this up will enjoy it too. * der neuedeutschmaschinegesellschaft = “the new German machine company.” Just thought you’d like to know. Netti Kasino Suomi – http://nettikasinorahapelit.com/kasinot/suomi/