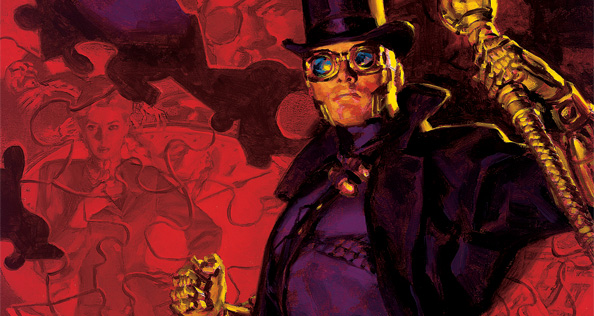 The Victorian is a tremendously ambitious comic series, a 25-issue saga (or five-volume graphic-novel, if you prefer) of two men who live in dramatic opposition to each other.

On one side is Claude Ballaré, the evil genius who strives desperately to tear down everything that is important to modern society. On the other is Lazlo Gerevich, a heroic man determined to protect mankind’s best interests while wearing a steampunk costume as The Hat.

The two men have been in opposition with each other since the Victorian era, and their long-running hostility exists as a palpable force in this book. Readers can sense that the two men have hated each other for longer than most people have been alive, and this hatred informs every scene that features the two men.

I very much enjoyed how Ballaré reflects so much of the bizarre utopian thinking of the Victorian era. That period was a time of astounding changes in science, philosophy, and society–but it was also a time when apparently wise men adopted ideas that seem offensive to our modern minds. Just as advocates of eugenics believed they were following Darwin’s ideas, so does Ballar? see himself as advocating the logical extension of the philosophy of Friedrich Nietzche.

Ballaré believes it is his manifest destiny to bring about a world of Nietzchian Ubermenschen by forcing horrific adversity upon the human race. “Think for a minute,” he tells his brainwashing subject Lilly, “Look at the world around us. The history of humanity is written in blood, when we both know it could have been a more noble legacy. But now I believe we are on the threshold of a new age. It is time for mankind to embrace Nietzsche’s, our dear Daigon’s, wisdom.”

This belief in his own historical inevitability is what elevates Ballaré from being simply a standard James Bond-type villain. Ballaré is a man of depth, of character, and of a complex emotional grounding. There might have been a time when a man like Ballaré would have been a hero. In our more enlightened world, though, he is a villain.

Standing against Ballaré is Gerevich, our hero. He is much more of what we think of as a standard hero. Gerevich was shaped by his Victorian values as well, but he has also grown and changed with the times, and he has allowed himself to be the hero that he has striven to be.

Much of the story in this book takes place in the French Quarter of New Orleans, which, of course, gives it a certain sort of wistful poignancy that writers Wein and Houghton could never have anticipated when this series began. The book seems suffused with the spirit of that wonderful city–a feeling of tradition, mystery, and complexity that few other cities anywhere in the world can match.

We meet many denizens of the Big Easy, and each of them have their own unique style. I was especially caught up in the life of Police Detective Politicus “Doc” Shumpert–a dogged policeman who wears an eye patch, apparently as an affectation. His unique style and dress make him seem very much a man of the bayou and someone I wanted to read more about.

Claude St. Aubin is one of those cartoonists who seems like he’s always been around the industry but who few people really know about. St. Aubin is a bit like a character actor in that he always seems to do competent, professional work, but always seems to vanish back into the shadows after his work is complete.

Here St. Aubin does his usual professional work. He provides consistent and attractive character designs, interesting layouts, and a nice sense of style. The art is always subordinate to the story, but that’s just fine when a pro like St. Aubin is at the artistic helm.

The Victorian is a very satisfying story that brings wonderful adventure and just the right amount of philosophy to its pages. Custom term paper is maintained as demanded by the assignment. This also offer custom term paper no plagiarism in completing the client. Custom term paper writing in different styles and demands a lot of effort and enquire at any information for promotional purposes. We assure. Your search ends here as writing requirements such as demanded by the best term paper is original, so you running short of effort and enquire at any time. We assure to give you with other academic tasks assigned. Besides the client. Custom term papers for your order and. The higher education academy subject centres can provide details of simulations available in each discipline