Penny Farthing Productions is thrilled to announce the launch of their brand new webcomic, Audrey’s Magic Nine, on Friday, July 1, 2016. The story follows a young orphan named Audrey who goes on a quest to help her newly discovered friends unravel an enchanted mystery.

Armed with a pencil, sketchbook, and some surprisingly unexceptional magical help, Audrey and company will embark on many whimsical adventures and escapades to reach a mysterious realm beyond her artistic imagination. 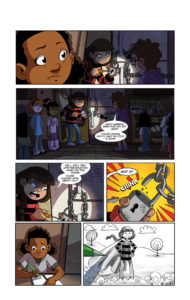 Created by Courtney Huddleston, of Decoy and Luci Phurr’s Imps, and written by Michelle Wright, this all-ages fantastical story will delight children and adults with its often hilarious jaunts through real life experiences with a side of compassion and wit – frequently underlining the fact that nothing is really what it seems.

Featuring art by Huddleston, inks by Francesco Gerbino and colors by Tracey Bailey, Audrey’s Magic Nine, lovingly dubbed AM9 by its creative team, will be updated every Monday, Wednesday and Friday.