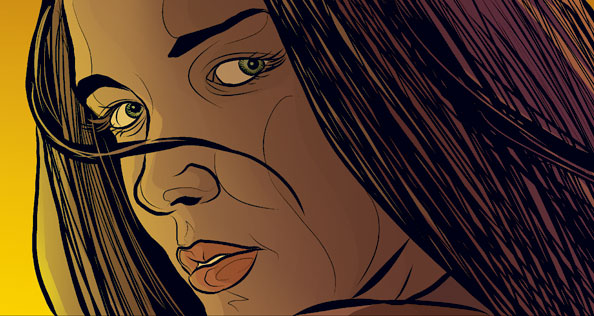 Listen to what your mother said: little white lies can lead to dark secrets and a troubled life. In the upcoming graphic novel Shadrach Stone, a literary agent who’s living on top of the world — a world built on lies — is forced to re-assess when a unspeakable tragedy hits home for him and people across the world. This down-to-earth tale leaves rooms for walks into alternate dimensions, showing this compulsive liar the true future and the consequences of actions.

Shadrach Stone is an original graphic novel by writer Stuart Moore and artist Jon Proctor scheduled to come out on September 15, via independent publisher Penny-Farthing Press. Writer Stuart Moore calls this the most ambitious book he’s ever written, and for artist Jon Proctor it’s the culmination of years of work in the industry. Newsarama talked with Moore about Shadrach Stone, and what readers can expect.

Newsarama: How would you describe Shadrach Stone, Stuart?

Stuart Moore: It’s a paranormal thriller about alternate worlds, and the consequences of living a life of lies in the modern, interconnected world. Interdimensional adventure, bad behavior, foul language, inappropriate sex, and a very nice introduction by Mr. Mike Carey, author of The Unwritten and X-Men: Legacy.

Nrama: The book centers around a man whom the book is named after: Shadrach Stone. You’ve described Shadrach as the biggest liar in America; can you tell us about him?

Moore: Shadrach Stone is the most successful literary agent in New York. When he weaves his web of deceit, publishers all over the city dance to his tune, throwing money at him and his clients. Shadrach learned to lie at a very early age, and it’s served him very, very well… until a national tragedy strikes, and Shadrach’s world comes crashing down. He learns the true consequences of the lies he’s told all his life, and he has to decide what to do next. In a way, he has to learn to take responsibility for the first time.

Nrama: Shadrach is described as a liar and successful literary agent. You’ve worked for years as a writer and editor — what led you to portray literary agent as someone so — mischievous?

Moore: An agent’s overriding goal is to get the best deal for his or her client. I’ve known very honest ones and I’ve known ones I wouldn’t trust to sell me a cigarette. It’s a profession where you really establish your own moral code and live by it. Plus, for the top people in the field, it’s pretty glamorous.  Of course, I could just duck the question and say: I know people. [laughs]

Nrama: Heh; speaking of sinister forces, I hear there’s a group involved in this called the Force Majeure. Can you tell us about them?

Moore: Force Majeure are a paramilitary group who’ve been watching Shadrach for a long time. They’re interested in him, both as a cause of interdimensional chaos and as the one man who might be able to help them stop it. But Force Majeure isn’t quite what it seems, either.

Nrama: How does the story get going? You said something on your blog about a national tragedy at the center of it all?

Moore: Yes, it’s a big one. I don’t want to spell it out, but I was there for it, and so were a lot of my friends.

Nrama: I’ll let you leave it at that. Moving on, for this project, you’re working with artist Jon Proctor. Jon’s got a very unique style — how’d it come to fit with what you had in mind for Shadrach Stone?

Moore: I’d been talking with Jon about trying to do something for Marvel — I think Axel Alonso at Marvel initially introduced us. I told him I also had something original I wanted to do, and he jumped all over it. We worked for a while to produce it as an original book — we were either going to self-publish it or try to go through Image — before things fell together at Penny-Farthing.

I love Jon’s very design-oriented style, and — I don’t say this lightly — I think he might be the best color artist in the business. He’s really stretched himself for Shadrach Stone, the work is more detailed, richer and more vibrant than anything he’s done in the past. I can’t say enough good things about it.

Nrama: this sounds like a story you’ve been carrying around for awhile. What led you to do this story, Stuart?

Moore: I’d had the idea for Shadrach’s “origin” for a while — and I’m talking around the details because I don’t want to spoil it too much, but I think it’s pretty emotionally powerful. Trouble was, I wasn’t sure what to do with the character after that. Then, at DC’s request, I cooked up a big plan for an overhaul of Nightwing that they didn’t end up going with (which is fine, completely their prerogative). When I overlaid it on Shadrach Stone, it was absolutely a perfect match. That’s where Force Majeure came from.

I love it when things come together like that.

If anyone’s interested, I write about this in much greater detail on the Shadrach Stone Blog, beginning with this entry.

Nrama: This book is being published by Penny-Farthing Press, who published two of your earliest comic works –Zendra and Para. What made you rejoin with them for Shadrach Stone?

Moore: When Jon and I had a big enough chunk of the book finished, I started planning to show it to a few publishers. I think Penny-Farthing was my first stop — at one of the New York conventions — and they jumped all over it; they just got it immediately. I didn’t even end up talking to anyone else.

Penny-Farthing is a great operation. They’re small but extremely professional, and their production work is impeccable. They take design very seriously, and they work closely with a printer near their offices, in Texas, which results in some of the finest printing in comics. They only publish a few projects at a time, and their goal is to shepherd them to other media as well, a goal I’m heavily involved with. I love working with them.

Nrama: This is coming out at the same time that your new monthly series for Marvel,Namor: The First Mutant, is hitting stands. What else are you working on?

Moore: Namor begins in August — an ambitious relaunch of Marvel’s underwater hero, pitting him against an ancient vampire threat from beneath the sea itself. For me, that book is the first in a wave of projects I have coming in summer and fall. Among the others:

– Spider-Man: Back In Quack (Marvel, September) – featuring Spider-Man and Howard the Duck, with art by Mark Brooks, and a Man-Thing back-feature by me and Joe Suitor. A meaty, satirical one-shot, and my tribute to Steve Gerber, whose work was a giant influence on me.

– One Month To Live (Marvel, September) – a five-issue series about Dennis Sykes, an ordinary man who receives super powers and a death sentence all at once. It’s masterminded by Rick Remender, and I’m writing issue #3, where the Fantastic Four take Dennis into deep space to face off against Ego the Living Planet. Art by Shane White.

– JLA/99 (DC/Teshkeel, October). Six-issue inter-company teamup between the Justice League and The 99, a teenaged super hero team I write for the middle eastern market. I’m co-writing this with Fabian Nicieza, which is a lot of fun; art is by Tom Derenick.

And believe it or not, there’s more. But that’s enough for now … I’m tired just thinking about it all!

A feature such as this helps you be a proactive parent